Home »
Articles »
Getting in: Are finances a factor in college admissions?

Getting in: Are finances a factor in college admissions? 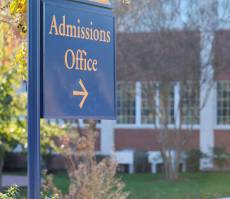 According to Inside Higher Ed's 2011 survey of admissions directors, some cash-strapped universities are lowering the bar to admit more applicants who are capable of paying full tuition. These preferential admissions policies favor not only well-off applicants, but also out-of-state and international students applying to public institutions where these students pay higher rates than their in-state peers. Students eligible for need-based discount tuition rates, by contrast, could face more competitive admissions at some schools.

Universities hit with plummeting funding and endowments are turning to their highest-paying applicants to make ends meet. Scott Jaschik, editor of Insider Higher Ed, reports an increasing emphasis on recruiting full-pay students, with about half of public and private colleges targeting full-pay and nonresident students.

"We found that a number of institutions said they were willing to admit full-pay students with lower grades and test scores," Jaschik says. "These policies are dominated by financial concerns."

About 10 percent of schools surveyed report lower GPAs and test scores for full-pay students as compared to other applicants, according to the Inside Higher Ed survey.

The University of California and University of Virginia systems are among the institutions to come clean about the dollar-friendly policies. UC Berkeley cited state budget shortfalls in defense of its decision to raise nonresident enrollment from 13 percent to 20 percent in 2010-2011:

Financial pressures appear to be distancing some universities from their mandate to serve the public and admit students based on academic merit. Jerome A. Lucido, executive director for Center for Enrollment Research, Policy and Practice at USC, notes that most colleges rank affordability among their top five concerns, but few are expanding their tuition assistance programs to help students in need.

Application strategies for a budget-conscious age

Students with limited means don't need to throw in the towel, however. Today, these students can play the admissions game to their advantage by targeting the right schools. If you're on a budget, consider schools with:

Financial need may or may not factor into your admissions profile. Steven Cohen, author of the bestselling college admissions guide, "Getting In! The Zinch Guide to College Admissions and Financial Aid in the Digital Age," advises students check for a need-blind admissions policy on the school's webpage.

"Need-blind means there is an absolute wall between admission and financial aid. Need-aware means they do take it into consideration. If there are two kids with identical credentials, the [need-aware committee] will take the one with means," he explains.

Public schools remain the best deal for in-state students. Resident applicants don't necessarily face diminished odds at public schools with nonresident-friendly admissions. In fact, nonresident admits are expanding access to funding for resident students at some schools due to the fact that the higher tuition rates for these students subsidize the discounted admits. Phillip Ballinger, admissions director at University of Washington points to nonresidents' role in sustaining the public subsidy.

High-tuition schools often offer generous aid too. Even middle-class families are eligible for more financial aid than they might expect, Cohen points out.

"There's a good chance you'll get something. Unless you're really on the bubble, it doesn't hurt to apply for financial aid," he says.

Universities remain overwhelmingly committed to affirmative action; more than 90 percent of admissions directors support preferential admissions for underrepresented student minorities, according to the Inside Higher Ed survey. If you are a first-generation college student or a racial minority, look for a school with a strong commitment to racial and socioeconomic diversity. Most universities publish demographic information for each entering class.

Many schools support students in need of financial aid. U.S. News & World Report publishes "Economic Diversity among Top 25 Schools," which ranks schools by percentage of need-based Pell Grant recipients. To find out whether you'll be eligible for financial aid, check the cost calculator available on each school's website. Mandated by the federal government, the cost calculator allows you to input your income to get an estimate of the total price tag of your education.

Students with a marginal or below average academic records can turn budget-minded admissions to their favor, provided they can pay full tuition. Universities don't publish score data, but you can get some sense of whether a school has a lower bar for non-residents by looking at application instructions or demographic data, says Cohen. Some schools will note average test scores and GPA for applicants, for example, indicating different expectations for residents and non-residents. Other schools publish demographic data, noting average entry qualifications for each group. By looking at these numbers, students can shop around for schools that meet their profile; a large public university in another state, for example, might have a track record of accepting non-residents with a high SAT but low GPA, for example.

Keep in mind, however, that the full-pay advantage comes at a cost--namely, a tuition rate several times higher than residents pay. Cohen cautions against students applying out of state in the belief that they will declare residency within the first year. Both state legislatures and schools have strict rules to prevent students from slipping into resident status midway through the college program.

For better or worse, tight budgets are impacting college admissions decisions. By looking for a school that meets your financial and academic profile, you can turn the new budget-conscious admissions landscape to your advantage.