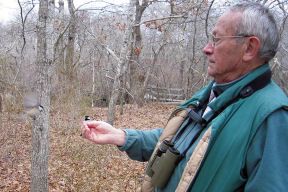 Aspiring research scientists, environmentalists, mobile technology aficionados and video game buffs all can contribute to myriad citizen science projects, along the way joining a global community of regular people contributing to research science. It's usually fun, often free and typically takes only the amount of time you want to give it.

Although the term "citizen science" is relatively new and increasingly common, the concept is longstanding. In the 19th century, for example, amateur naturalists aided experienced ornithologists by keeping track of the various species of birds they encountered. Today, modern technology and creativity have expanded tremendously the types of projects the public can participate in. All have in common the fact that volunteer public efforts really contribute to ongoing scientific research.

Getting involved is easy

John Ohab with the Science for Citizens website says his database has over 400 projects that have a way for people to sign up and contribute their own data. Some of the more readily accessible projects simply ask you to make an observation (such as when buds appear on trees, what birds are at your feeder, or the snow depth wherever you are) and send in your data points. In most cases you submit your data via a website or Twitterfeed. SnowTweets, for instance, lets participants dash off their measurements from their phones via Twitter. Cyrosphere researchers at the University of Waterloo in Canada collate the snowfall data and use it to check data from satellite observations.

Projects appeal to different people depending on their specific interests. Ohab says those that, like SnowTweet, harness the power of smartphone technology, often appeal to high school and college students.

One collaboration among a dozen science centers around the country is developing a smartphone app for the public to help gather data on the Urban Heat Island Effect. C3: Communicating Climate Change is a project that hopes to develop a robust database of the temperatures along the urban-rural gradient--in other words, amassing large datasets so that meaningful interpretations can be made. According to the Maryland Science Center's website, the difference between the temperature of a metropolitan area and the rural areas that surround it, or the Urban Heat Island, "is not an effect of climate change, but rather of human activity shaping our environment. One may ask, if we can make changes on a local scale, are we also responsible for changes globally?" Citizen scientists will provide the raw data that researchers use to explore this and other questions.

The Cornell Lab of Ornithology sponsors bird watching-related citizen science projects, such as FeederWatch, which is great for families and people of any age or ability, and NestWatch, which requires a bit more care and skill. With FeederWatch you simply put up a bird feeder in the late fall or winter and keep track of who comes to eat. NestWatch provides a bit more of a challenge. You first must read some guidelines on how to observe nesting birds without disturbing them and then find an appropriate bird home to monitor. But for students in the south, especially, nesting may happen during the school year and provide some interesting complements to a science curriculum.

The Cornell Lab also has extensive online resources, including eBird, a site that lets birders keep an electronic tally of the species they see while also contributing valuable count data (such as species, location, and date) to researchers. Drawing from registered users around the globe, eBird "is amassing one of the largest and fastest growing biodiversity data resources in existence," according to its website. That's a resource useful to biologists, land managers and urban planners and it's available to anyone who wants to use it.

Partly because Cornell researchers have such a long history with citizen science, the bibliography of research that has used publicly-generated data is now quite long. It's proof-positive that everyone can contribute something to the scientific enterprise.

Lisa Gardiner, director of education at the National Ecological Observatory Network, says over the years scientists have shifted from hesitantly accepting carefully screened citizen-generated data to employing quality control measures that give them the confidence that real research can be conducted with the massive data collections citizens provide.

"A few years ago when I'd go to conferences I'd hear that there was some concern about citizen-scientist collected data," she says. That has dissipated. Simultaneously, the range of disciplines offering projects has exploded.

"Astronomy has been really a leader in citizen science for a long time," she says, and in ecology and biology her organization and others (see also the USA National Phenology Network) have sponsored projects to monitor plants and animals. But now, she says, the options are exploding. For example, some biologists have created an online video game, Phylo, that generates data to help them explore complicated issues related to genome alignment. Users sign up, log in and play the game, quickly generating copious amounts of data that can then be evaluated and, if they improve what's already in the database, added to it.

"Even this very lab-based science has found a way to involve citizen scientists," Gardiner says.

New projects crop up all the time, Ohab says. Recently, the Museum of Science in Boston launched an effort to tally fireflies. Among the aims of the study is to understand how lawn chemicals affect fireflies, so citizen scientists are asked to include information about how they treat their lawns when they sign up.

Bard College, a small liberal-arts school in New York State has even created a January term course on citizen science that all first-year students are required to take. The point isn't that everyone should become a scientist, but rather that anyone can contribute to science and gain some understanding of the scientific process.

Of course, for the most dedicated citizen scientists, there are ample opportunities to use publicly-shared data to do their own projects. David Bonter, assistant director of citizen science at the Cornell Lab of Ornithology, points people to the Avian Knowledge Network.

"AKN is a free source of raw data for many large-scale ornithological projects collected via citizen scientists (including FeederWatch and eBird)," Bonter said via email. From it, enterprising students could design their own research questions and then use the data to search for answers.

And remember those observations of birds from the 19th century? Well if your inclination is to sit inside at your computer (and you get tired of playing Phylo), you can participate in a massive effort to digitize over 70 years of bird observation data. That project's the North American Bird Phenology Program and when it's completed, ornithologists will be able to access bird sightings going back to about 1880 and study those for trends, such as where different species lived at different times and how migration habits have changed. So don't just sit there--do some science!

Pictured above is lifelong birder and citizen scientist Ken Pauley, shown with chickadees. Pauley has been transcribing bird sightings for the North American Bird Phenology Program.

For related news and other information from Schools.com, see: