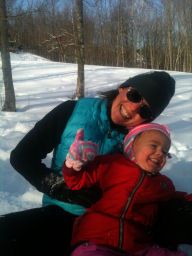 When Brook Minner decided her first professional job would not be her life-long career, she set out to find something different. That set her on a path that took her through an online Master's in Library Science program and into a whole new professional world. She spoke with Schools.com about the transition, the online master's program and her future.

What were you doing and what precipitated your desire to become a librarian?

I worked for a domestic violence agency in Bangor, Maine. I ran the homeless shelter and did case management. I did a lot of advocacy work at the state-wide level. But I burned out and my husband saw the job at the Blue Hill Library in the paper. I love libraries and I love to read. I was so excited, but didn't really think I had a shot at it and was really, really lucky to be hired.

Why did you decide to pursue the master's?

It was pretty clear to me that it was a good job and that I could stay there forever and not make a whole lot more money. Or, I had to get the master's. And when I looked at other library jobs, it was clear that it was kind of a fluke that I got mine. For the most part, every professional library job requires the master's degree.

It was a practical choice. I got a list of the accredited, online programs from the American Library Association. I had to find something that was completely on-line because my husband and I were committed to being here. There were just a few programs in the country that were all online. Of those, Connecticut happened to have a tuition break for New England residents. I paid in between out of state and in-state tuition, which made it more affordable.

There was a big learning curve at the beginning. The whole first semester I spent as much time figuring out the software and how it all works as I did figuring out the school work. Once I got the hang of it, it was great. At that point, I was working full-time, I was in school full-time and I had a baby. I was extremely busy. Being able to jump in and do my school work whenever I could was perfect. There's no way I could have done this program if I had to sit in class. It just never would have happened.

How did you fund your degree?

At the end of my first year, I applied for a graduate student grant from the university. I got that, and it paid for my last semester. The other semesters, I paid about a quarter up front, each semester, and the rest I had to take in loans. This degree cost me about $12,000. I felt like it was a pretty good deal because it's not unreasonable for me to think that my next job could be that much of an increase in pay--just one step up.

Will you, with this degree, earn the salary you hoped you'd be able to earn when you decided to get the master's degree?

I definitely think I will be able to earn the salary that I expected to earn when I decided to get the degree. Finding a job has been more difficult than I anticipated. I just found out a week ago that I didn't get a job that I applied for--150 people applied for the job at a library in rural Maine, at a small college. So that's the competition. That's just because of the economy right now. I didn't anticipate that. When I was applying to graduate school in early 2008, things were just beginning to unravel. I certainly didn't know what was going to happen. I would have done it anyway, but I think the impact that the economy is having on me is just that my job search is taking longer.

What advice or suggestions do you have for people who are newly parents or in their 30s and thinking about doing an on-line master's?

It was tough. What helped me was I was financially motivated for this degree. I really wanted to do it because I knew I would make more money and I hate saying that because it's not my theory of education. But it was true. I'm not sure what advice I would give, other than get ready and have a lot of energy. Have a good partner or at least somebody in your life, if it's not a partner, who can be really supportive and help you. I had a ton of support. My husband really did everything at times. He took care of the house, he took care of the baby, he did the laundry, he made all the meals. There's no way I could have done it and kept my sanity without that level of support.

In the job market, what have you found has been the response of prospective employers to the on-line degree?

I worried about that because I had kind of mixed views about on-line programs. My experience so far has been that either it doesn't matter at all or it's somewhat positive. For me there's been no negative impact at all. The library field now is so tech-heavy and the fact that I participated fully on-line I actually think is working to my benefit to a certain extent. A lot of librarians at colleges now are on-line librarians for on-line classes. So, having that experience as a student could actually work in my favor.

In the spirit of James Lipton, Bernard Pivot, and Marcel Proust, Schools.com ends each Cool jobs interview with the following questions:

1. What did you eat for breakfast? Smoked shrimp omelet

2. Which day of the week is your favorite? Friday (if I don't have to work Saturday, otherwise Sunday)

3. Which day of the week is your least favorite? Thursday

4. What was the first job you ever had? Bagging groceries at a grocery store

5. What makes you angry? Intolerance, ignorance (in equal measures, I guess)

6. What makes you joyful? My daughter, the sunshine

7. If you could have any job, other than your own, what would it be? Successful author

8. If you had the time and the money to study anything at all, what would you choose? Architecture/design

9. What did you want to be when you grew up? A lawyer

10. Can money bring you happiness? Oh, sure, to a certain extent. You gotta have enough.