Home »
Articles »
East Coast vs. West Coast: Are you on the wrong coast for your career goals?

East Coast vs. West Coast: Are You On The Wrong Coast For Your Career Goals?

Even though the coastal regions of the U.S. make up less than 10 percent of the country's total land area, they contain about 40 percent of the population — that's a whopping 123 million people. Naturally, with that comes a considerable density of opportunity for employment and education in the cities on the edges of the continent, and plenty of people migrate to either the East Coast or the West Coast to seek their success.

But for many, a big question remains: Which coast is the right coast? When considering your future, are you more at home among the laid back, windblown surfer types of the lower West Coast or the Burberry-and-boat-shoes yacht club set of the upper Eastern Seaboard? Upstart Silicon Valley startups or the 200-year firms of old-money tycoons? Cyprus forests or redwoods? Palm trees or short-leaf pines? The stereotypical notions triggered by coastal allegiances, while sometimes comical to envision, may be pretty accurate reflections of what your career goals should be.

You could assume if you want a career in tech, head to the Bay Area. Or a career in finance, move to the Big Apple. But looking at job and school data relevant to the tech, finance, business and entertainment industries, we learned some of the hottest cities in the tech and entertainment industries are surprisingly a good distance away from Hollywood and Silicon Valley, and similarly, some of the best degree programs in business and finance are available all the way across the country from Wall Street.

So consider this: If you want to end up one place, in some cases, it'd be best to start geographically opposite. Check out what we’ve found after the jump — you might find you're on the wrong coast for your career plans. 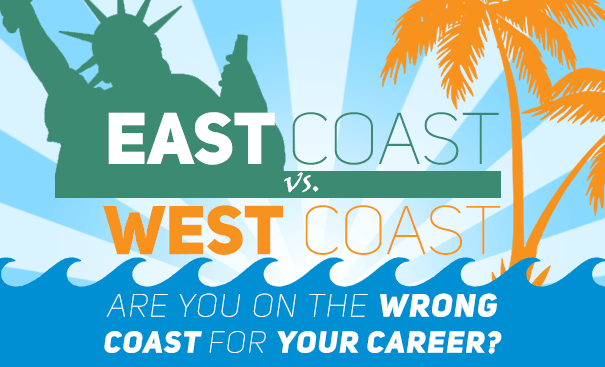 It's well understood that prospective members of fast-growing careers like applications developer, systems software engineer, database manager, IT security analyst and more tend to find their most fertile vocational soil at tech-focused companies. Common knowledge places top tech firms out West, and while the data suggests that might be true, there's more to it.

Most people would agree that the East Coast seems to have the dominant position in terms of companies in the finance sector. Massive financial firms like Goldman Sachs, JPMorgan Chase and Morgan Stanley all make their homes in New York City, and the World Federation of Exchanges reports that the New York Stock Exchange sees roughly three times the annual market capitalization of the second-largest such exchange worldwide.

Between the Walt Disney Company and Warner Brothers in Burbank and the myriad movie and television production facilities in Hollywood, it certainly seems as though the West Coast is a lock as the national entertainment industry destination. It's fairly firm in the national imagination that actors, writers, documentary filmmakers, cinematographers, set designers, photographers, entertainment executives and other vital industry roles are more prevalent on the Pacific Coast than anywhere else.

Every state in the U.S. is home to notable employers of managers, executives, business analysts, logisticians, HR specialists, compliance officers, process leads and other administrative personnel, so it can be tough to pin down the best coast for general business enterprise activity. The 10 top U.S. brands by dollar value in 2014 are distributed evenly, for one thing, with four headquartered on the West Coast, four on the East and two — Walmart and AT&T — in the Midwest.

The biggest takeaway from these analyses is that even though one coast seemed to edge out the other in each category, there was consistently enough upside to the second-place finisher to make for a more thought-provoking experience than we imagined. The West Coast may have the edge in tech and the East Coast may offer a higher volume of finance work, but the other two categories were veritable toss-ups.

Consider this. If you're not flourishing wherever you've chosen to live and work, chances are pretty good that it's not the only region of opportunity in your field. If you feel your talent isn't being used as best it can, why not see if the salt air of a different ocean doesn't give your career a lift? There's nothing to lose by a little research, anyway, and changing careers is always exciting.