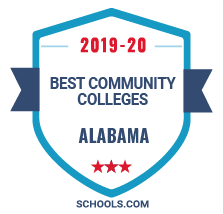 Looking to start or finish a college degree in Alabama? The best Alabama community colleges can train you for a new job, help you follow a personal passion or provide an inexpensive way to prepare for your transfer to one of the hundreds of bachelor's programs at universities in the state.

The Alabama Community College System (ACCS) comprises a network of 24 community and technical colleges that includes the oldest military junior college in the U.S and a workforce development initiative called the Alabama Technology Network. Its wide selection of schools means that students with all types of academic and career ambitions should be able to find the programs they're looking for.

We collected a huge dataset from the National Center for Education Statistics (NCES) and analyzed it to figure out which institutions were the best community colleges in Alabama. Check out our list of the top two-year schools in the state and find out if your local college made the grade.

THE TOP 10 COMMUNITY COLLEGES IN ALABAMA

Founded in 1898, Snead State Community College stands as the oldest associate degree-granting institution in the state. Despite more than 125 years of history educating Alabama students, a focus on responding to the changing times has helped it keep up with the academic necessities of the 21st century.

Snead State is one of the best online colleges in Alabama, for example. The Boaz institution reported that more than 75 percent of students took at least some online classes, and online Associate of Applied Science (A.A.S.) degrees are available in fields like in applied business, child development and office administration.

On-campus degrees include nursing and computer science technology. More than 70 subjects are offered for students who plan to transfer to a university after graduating.

John C. Calhoun State Community College, commonly known as Calhoun Community College, was first established in 1947 and grew to become one of Alabama's largest two-year schools. Total enrollment in Fall 2018 topped out at more than 9,700 students.

Calhoun may be one of the best Alabama community colleges for students seeking online instruction. Nearly 45 percent of students took at least some online courses in 2018, and around a dozen Associate of Science (A.S.) concentrations are available fully online.

A.S. degrees that can be earned in the virtual classroom include computer science, psychology and social work. Several vocational programs can be completed online as well, particularly in health care fields like dialysis technology, veterinary assisting and medical billing and coding.

George C. Wallace was a longtime Alabama politician who helped bring about the public community college presence in the state. The Hanceville school known locally as Wallace State Community College is just one of the namesake institutions that honor his contribution to Alabama higher education.

Degrees at WSCC are earned through a Pathways system, which allows students to choose a general subject category as well as a specific major. This approach can help students ensure that their general education courses are well-suited to their goals.

Students hoping to transfer to a university after finishing their community college program tend to flock to Jefferson State Community College, at least according to the numbers. No other school on our list reported a higher rate of successful university transfer than this Birmingham institution.

Jefferson State offers several amenities that students might be hard-pressed to find elsewhere. For example, culinary arts students here can learn while they work at a "classroom café" called Bistro proVare.

A wide range of career and vocational programs are available here, including a few less-common programs like funeral service education. Students looking to get into the workforce as fast as possible can choose from a list of several fast-track programs in fields like clinical medial assisting, welding, and full-stack Web development.

Shelton State Community College educates around 4,300 students each year on its two Tuscaloosa campuses and online. Nearly 30 percent of students here take at least some of their courses in the virtual classroom.

Creative students may have a few extra reasons to choose Shelton State over other two-year schools in the state. In 1997, the Alabama Legislature designated the institution as Alabama Junior College of the Fine Arts, and the Alabama Stage and Screen Hall of Fame is located on the Martin campus.

If affordability is one of your main concerns, Southern Union State Community College has a few encouraging statistics for you. Just one other two-year school in the entire state reported a lower average tuition and fees cost than this eastern Alabama school, and tuition payment plans are available to help students better fit the cost of their education into their budgets.

This relatively young institution was formed from the merger of a pair of regional two-year schools in 1993. The institution operates three total campuses -- the flagship location in Wadley and satellite campuses in Valley and Opelika.

Five separate degree and certificate plans in computer science are available here, including a short certificate in app development. Areas of technical study include machine shop technology, cosmetology and engineering and design.

Chattahoochee Valley Community College is one of the best community colleges in Alabama for students seeking financial aid, reporting that roughly 92 percent of enrolled learners received some form of aid package in 2018. The student-faculty ratio here is a comfortable 17:1.

Students who don't yet have a clear vision of their career goals can access CVCC's Career Coach, an online tool that provides guidance and information customized to the Chattahoochee Valley region.

Northeast Alabama Community College put up some of the strongest student success numbers among all two-year schools in Alabama. This institution of nearly 2,900 students posted a higher rate of first-year student retention than all but two other schools in our top ten, and only one of the other top community colleges in Alabama reported a higher graduation rate.

A.S. programs here include plans in architecture, communication studies, agronomy and soils and education. Vocational degrees and certificates can be earned in subjects like emergency medical services and air conditioning and refrigeration.

More than 25 extra-curricular clubs and activities are available for students at NACC. The list of options includes an art club, a fishing club, a campus ministry and multiple honor societies and musical ensembles.

The roots of Central Alabama Community College go back to the 1960s, but the institution itself is around 30 years old. It was formed in 1989, when two nearby schools merged their efforts to better serve students in their region.

One of the larger proportions of online students in the state can be found here — more than 42 percent of the student body takes advantage of the flexibility of the virtual classroom. This institution's Alexander City campus offers one of the most close-knit learning environments among our top ten schools, reporting a student body of fewer than 1,700 learners in 2018.

An initiative called 15 to Finish works to help increase the on-time graduation rate at Bishop State. It aims to give students the support they need to take 15 credits per semester.

Career technical education (CTE), sometimes referred to as career and technical education, is an emerging approach to high school and college instruction. It combines academic study with career-focused skills training to prepare students equally for continued education at the bachelor's level or high-demand jobs in the modern workforce. More than half of the jobs in Alabama that pay a median salary of $55,000 are held by workers without a bachelor's degree, and CTE programs in Alabama focus on making jobs like those available to as many residents as possible.

The top industries for career technical education jobs in Alabama are found in the manufacturing, health services and transportation and utilities industries, with construction and retail work rounding out the top five. Here's a list of CTE resources in Alabama that you can check out for more information:

The Alabama Community College System (ACCS) administrates most of the career technical education programs in the state, and all 10 of our top community colleges in Alabama are members. Check with advisers at your school for more information about specific programs that might be available.

One goal of the ACCS is to provide community college students with transfer agreements that allow them to shift their credits into university programs with as little difficulty as possible. Students at any ACCS institution can obtain an official transfer guide designed to help them chart a smooth course through their associate degree curriculum and into a related bachelor's program.

Students looking to transfer into public Alabama universities should make use of the guides available from the Statewide Transfer and Articulation Reporting System (STARS), while those hoping to enroll in a private institution for their bachelor's degree should be sure to use a transfer guide designed for Alabama Association of Independent Colleges and Universities (AAICU) schools. We'll provide a link to the official guides for those transfer agreements in our resources section.

Once you've decided where you'd like to earn your bachelor's degree, don't forget to look into the availability of transfer scholarships from your destination school. The University of Alabama, Auburn University and several other top four-year schools in Alabama provide special financial aid packages for in-state community college transfer students.