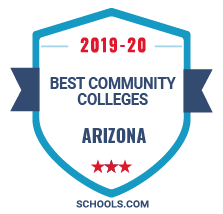 The Maricopa County Community College District (MCCCD) is one of the largest districts in the country, serving more than 200,000 students in total each year, and it contains just ten of the state's more than 20 two-year schools. Options for career training and academic study can be found all over the state.

Whether you're a recent high school graduate, a professional looking to move up in your career or a student who's hoping to transfer to one of the top Arizona universities, knowing about the best community colleges in Arizona can help you make the right choices moving forward. Take a look at our list of the ten best Arizona community colleges and see if one might be right for you.

THE TOP 10 COMMUNITY COLLEGES IN ARIZONA

Mesa Community College opened in 1966, occupying less than an acre of land in a swath of largely undeveloped desert. Today, the city of Mesa is the third-largest in Arizona and MCC has grown into a two-campus institution that serves more than 20,000 students annually.

Transfer degrees make up a large portion of the awards conferred at MCC. The three top programs by enrollment led to Associate in Arts (A.A.), Associate in General Studies (A.G.S.) and Associate in Science (A.S.) degrees.

MCC also offers a total of more than 150 certificates and Associate of Applied Science (A.A.S.) degrees designed to expand students' career options. The A.A.S. in nursing took the No. 4 spot on the college's list of top programs.

As the flagship institution for the MCCCD and the namesake of the state's capital, Phoenix College is one of the best-known community colleges in Arizona. More than 11,000 students were enrolled here for the 2017-18 academic year, and around 150 degree and certificate programs are available for on-campus students.

A diverse array of programs is available here, from certificate or A.A.S. plans in fashion merchandising and massage therapy to traditional academic majors like history, geography, English, chemistry and music.

Founded in 1920, PC is also one of the oldest community colleges in the state. Its Phoenix campus features a range of amenities for students and community members, including premium athletic fields, a performing arts center and a dental clinic.

Formally known as the Cochise County Community College District, Cochise College provides a close-knit academic environment despite having a fairly large student body. The total student population here numbers over 11,000, but the average class size is just 12 students and the student-faculty ratio is 16:1.

Cochise is also one of the best Arizona community colleges in terms of affordability. No other school on our list charged a lower average amount of tuition and fees than the just over $2,000 recorded at this Sierra Vista school.

Estrella Mountain Community College is the youngest institution in the MCCCD, but it's grown to prominence in leaps and bounds since its founding in 1992. The Avondale institution has increased its enrollment to nearly 10,000 students as of 2019, and a satellite campus opened in downtown Buckeye in 2011.

To address its rapid growth, EMCC has concocted a master development plan that extends through 2024 and further enhances its capacity to serve students. The plan details more than 800,000 square feet of facilities, including new academic buildings, remodeled residence halls and a campus loop road for added vehicle traffic.

EMCC students can choose from more than 90 degree and certificate programs, including some rare or unique offerings. Certificates are available in interdisciplinary storytelling, ecological literacy and desktop publishing, among other subjects.

Founded in 1985, Paradise Valley Community College is a relatively young institution and a member of the MCCCD. It was originally established as a division of Scottsdale Community College, but it took its current name two years later and now serves more than 8,000 students each semester.

Students have a total of more than 70 programs to choose from at PVCC. Business-minded learners have certificate options like marketing, organizational leadership and small business start-up, while those focused on tech can earn A.A.S. degrees in computer information systems and programming and system analysis.

PVCC also posted impressive numbers in the student success portion of our analysis. Its graduation rate was the third highest on our list, and no other school in the state had a higher rate of first-year student retention.

Glendale Community College has graduated more than half a million students in its 50 years on the higher education scene, and it shows no signs of slowing down. Nearly 18,000 learners walk through the doors of GCC each semester and choose from a catalog of more than 100 degree and certificate programs.

Nearly a dozen programs in the administration of justice are available on campus at GCC. Students can choose from a list that includes an A.A.S. plan in forensic science and certificates in homeland security and victimology.

Adult students with family responsibilities can make use of a valuable amenity at GCC. Students on the main Glendale campus have access to an early childhood learning center that can provide care to children aged 18 months to four years.

Students hoping to transfer to a bachelor's degree program at a university might want to give some extra consideration to Chandler-Gilbert Community College. Just a few other two-year schools in the country reported rates of successful university transfer that were higher than the more than 27 percent recorded here.

If you've dreamed of a career in the aviation industry, CGCC can help. Certificates in aircraft maintenance technology and airframe maintenance can teach you the skills necessary to keep aircraft in good repair, and the A.A.S. program in airway science technology can train you to fly commercial, agricultural, corporate and private planes.

CGCC also stood tall in terms of student success. It took the No. 2 spot in the state in both the retention rate and graduation rate categories.

Rio Salado College is one of the larger two-year schools in the state, reporting a student body of more than 18,000 in 2019. It's also one of the top online community colleges in Arizona by enrollment — more than 60 percent of students here take at least some of their courses in the virtual classroom.

Three certificates and a degree in addictions and substance use disorders can give students the skills they need to combat the opioid crisis. A certificate in sustainability can teach students how to develop an effective relationship between nature and humankind.

Founded in 1966, Pima Community College is another large two-year school in the Grand Canyon State. Total enrollment here was more than 22,000 in 2018, with the vast majority of students taking for-credit classes.

Pima makes around 180 degree and certificate programs available to on-campus students, and offerings are as diverse and specialized as you might expect from such a large catalog. Students can choose among more than a dozen degrees and certificates in the social sciences, including an A.A.S. degree in ethnic, gender and transborder studies, and aspiring woodworkers can learn carpentry or cabinetmaking.

Just two other schools in our top ten reported higher rates of successful university transfer among their graduates than Scottsdale Community College. More than 24 percent of students here successfully move into bachelor's degree programs after finishing their community college study.

Students with their eyes on the stars can learn the fundamentals of astronomy in an A.S. program designed for university transfer. If you're hoping to join the ranks of business professionals as fast as possible, SCC offers fast-track schedules for a certificate and A.A.S. degree in business administration that structure their courses in five-week or eight-week formats.

SCC doesn't explicitly offer fully online degrees, but several courses can be completed in online, hybrid or accelerated formats. Close to 30 percent of students here earn at least some of their credits online.

CTE stands for career technical education, or career and technical education, and it's making a big difference in the lives of workforce-bound high school and college students. CTE programs in Arizona blend career-ready skills training with academic instruction to create a well-rounded education experience that's designed to fit smoothly into either a career path or a decision to continue your education at the university level.

For an example of the impact of CTE in Arizona, look no further than high school graduation rates. Students who focused on career technical education study while in high school graduated at a rate of 98 percent — a boost of 20 percentage points over the statewide average rate.

Here's a quick list of CTE resources in Arizona:

All of the schools in our top ten offer some form of CTE program, whether it's dual enrollment credits for high school students, accredited job training programs for adult learners or another approach. Check with advisers at your local community college to learn more about your options.

Transferring your community college credits into a degree program at one of the four-year colleges in Arizona can be a simple process if you follow the right steps. Here's a quick rundown of transfer agreements in place at three top Arizona universities: