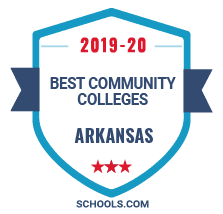 Students seeking an affordable education that will have them ready for the workforce should look closely at the best community colleges in Arkansas. These two-year schools are known for technical degrees and certificate programs that emphasize career readiness.

Plus, the top Arkansas community colleges offer transfer degrees that can be used as the foundation for a bachelor's degree at another institution. That helps make community college a smart choice for students regardless of whether they want to pursue an academic or career-based education.

Arkansas has 22 public community colleges that serve districts across the state. They enroll more than 800,000 students each year, and the nonprofit organization Arkansas Community Colleges notes that their average tuition and fees cost is less than half that of a four-year university.

If you're wondering which of the state's 22 schools rose to the top, read on to see our picks for the top community colleges in Arkansas.

THE TOP 10 COMMUNITY COLLEGES IN ARKANSAS

There are four academic divisions at PCCUA: allied health, applied technology, arts and sciences and business and information systems. Associate of Arts (A.A.) degrees are available in forestry and wildlife management, early childhood education, music, business administration and more. Those hoping to take advantage of the flexibility of online community colleges in Arkansas can find dozens of distance education courses here.

NorthWest Arkansas Community College has grown quite a bit since it first opened its doors in 1990. It's the largest institution by enrollment among the best Arkansas community colleges today, welcoming nearly 8,000 students each term. NWACC has its main campus in Bentonville and maintains learning centers in three other cities.

At NWACC, students can earn degrees and certificates in a wide range of major subjects. Degree programs designed for university transfer include A.A. plans in child advocacy and global studies, as well as Associate of Science (A.S.) programs in fields like business, engineering and art history.

There are several reasons why Arkansas Northeastern College lands among the best Arkansas community colleges. It has one of the lowest tuition rates in the state, charging an average of just over $2,300 for in-district residents, and students with young children can take advantage of day care services at the NIBCO Children's Care Center.

According to the numbers, non-traditional students might feel especially comfortable at this Blytheville school. The average age of students at ANC is 28, reflecting that older learners returning to school make up a significant portion of the student body.

South Arkansas Community College is another one of the more affordable two-year schools in the state, reporting an average tuition of less than $85 per credit hour for students who live in-district and an average total tuition of roughly $2,700 for a full year of study. This close-knit institution features a total enrollment of fewer than 1,500 students and a comfortable student-faculty ratio of 15:1.

More than 20 transfer agreements with four-year colleges and universities are in force at Southark, and a general transfer A.A. degree program can help you complete your university general education requirements without deciding on a major. Health science degree and certificate degree options for career-bound students include such fields as registered nursing, occupational therapy assisting and medical coding.

Named for the waterway that runs through its home city of Pocahontas, Black River Technical College belongs among the top online community colleges in Arkansas by multiple measures. More than 49 percent of students here took at least some of their credits in the virtual classroom in 2018, and the catalog of programs available at least partially online contains over a dozen associate degree programs and certificate plans.

Subjects of study available entirely through distance education include A.S. plans in criminal justice and fire science administration, a general education A.A. degree and a technical certificate in nutrition and foodservice management. Programs that consist of at least 50 percent online courses include associate degrees in business administration and crime scene investigation and certificates in health professions and microcomputer repair.

Arkansas State University - Beebe was founded in 1927 and now operates civilian campuses in Beebe, Heber Springs and Searcy and a military education center on the Little Rock Air Force Base in Jacksonville. Around 3,400 students attend classes here each semester.

Students enrolling in ASUB can choose among degree and certificate programs in diverse fields such as automotive technology, practical nursing, agriculture, computer information systems, fine arts, welding technology and more. Certificates in niche fields like upholstery and power sports technology can be earned on campus.

As part of the Arkansas State University System, ASUB also offers its students the opportunity to earn bachelor's and graduate degrees from Arkansas State without leaving the Beebe campus. Workforce training and adult education are available as well.

Ozarka College is one of the best community colleges in Arkansas, but that's not its only claim to fame. The Melbourne school also boasts the distinction of being one of the fastest growing small community colleges in the nation. Despite its growth, Ozarka maintains a student-faculty ratio of 14:1 and features a close-knit student body of around 1,100 learners.

One of the associate degree programs offered here can train you for a career where the sky truly is the limit. The A.S. program in aviation provides training in the techniques of flying single-engine aircraft and serves as a strong foundation for advanced flight certifications or transfer to university aviation programs. Other associate degree programs available here include agriculture operations, culinary arts, criminal justice and corrections and agriculture.

At UACCM, students can take advantage of a rich experience that includes access to a number of student clubs and organizations, hands-on training, intramural sports and a variety of support services. In addition to having an affordable tuition rate, the UACCM offers a wide array of scholarships for students in its academic and technical programs.

Student success was a statistical bright spot for the University of Arkansas Hope-Texarkana. Only a handful of other two-year schools in the state posted graduation rates that could match the number recorded here, and no other institution in our top ten reported a higher percentage of first-year students returning for the second year of their degree plans.

The original Bowie knife was made in Arkansas, according to local lore, and UAHT is working to maintain the state's leadership in the bladesmithing trade by offering certificate programs of proficiency at the James Black School of Bladesmithing in Washington. Available programs in criminal justice include three levels of study in crime scene investigation and law enforcement administration.

Fewer than 1,600 students attend school here each semester, and the student-faculty ratio is 16:1.

Arkansas State University - Mountain Home isn't just one of the top community colleges in Arkansas, it also competes on the national level with other similarly-sized institutions. The Aspen Institute, a nonprofit organization that focuses a part of its efforts on educational quality, named this Baxter County school among the finalists for its 2021 Aspen Prize for Community College Excellence.

The ASUMH mission is to enhance student lives by providing opportunities for academic access and diverse experiences that lead to lifelong learning and an enhanced quality of life. Programs of study available here include an A.A.S. and two levels of certificate in mechatronics, a dozen degree programs and certificates in computer information systems disciplines and a certificate or an associate degree, respectively, in funeral directing and funeral science.

A consolidated approach to career technical education (CTE) has been sweeping the nation in recent years, and the results show that it's making a difference in students' lives. High school students who concentrate on CTE subjects in Arkansas graduate at an impressive rate of 99 percent, fully 11 percentage points higher than the overall state average.

The occupational-academic methodology of college-level CTE programs in Arkansas is paying dividends as well. The rate of successful degree completion by CTE students at two-year schools is more than twice the statewide community college graduation rate, and 70 percent of graduates from career technical education programs find a job, begin an apprenticeship or enter military service within six months of finishing school.

Here's a list of some helpful resources for anyone looking to learn about CTE in Arkansas:

Most of the two-year schools that offer CTE programs in Arkansas are members of Arkansas Community Colleges, although some private institutions are governed independently. If you're thinking about pursuing a career technical education certificate or degree program, check with the individual schools you're considering to find out more about the specific programs they offer.

If you're earning a technical degree or completing a certificate program, the workplace will likely be your next stop after graduation. However, those who earn an Associate of Arts or an Associate of Science transfer degree should get ready for the process of continuing their education at a four-year school.

A state law — Act 182 from 2009 — ensures all credits earned by someone completing a transfer degree from a public college are accepted by public four-year schools. As a result, graduates of the best community colleges in Arkansas may be admitted to a university as juniors, having completed the entirety of their first two years of study.

Even private four-year schools often accept transfer credits from Arkansas community colleges and apply them toward a bachelor's degree. The Arkansas Course Transfer System, administered by the state's Department of Higher Education, can help students understand transfer agreements between individual universities and how they work.

You can also take a look at our guide to college transfers for more information on transfer agreements and how you can prepare for your own successful transfer.