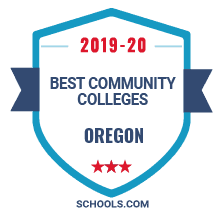 Oregon is home to 20 two-year schools, of which most are public institutions represented by the Oregon Community College Association (OCCA). Whether you're looking to advance your career by gaining new skills or to assemble a transfer portfolio that puts you on track to a university bachelor's degree plan, the best community colleges in Oregon have programs that can help you get where you're going.

We gathered affordability, flexibility and student success data from the National Center for Education Statistics (NCES) and analyzed it to determine which institutions could rightly be called the best Oregon community colleges. Check out the list below and learn a few details about what each of the Beaver State's two-year schools have to offer.

THE TOP 10 COMMUNITY COLLEGES IN OREGON

Adult students tend to appreciate the opportunity for flexible class scheduling, and Portland Community College offers multiple options for coursework outside of normal weekday hours. Not only do nearly one in four students attend at least some of their classes online, but the Portland institution also offers evening and weekend classes for on-campus students. Perhaps as a result of such flexibility, PCC posted the best first-year student retention rate in the state in 2018.

The catalog of programs available here includes a degree in addiction counseling, a certificate in geographic information systems (GIS) and numerous career pathway certificates in the classical trades. Vocational students can choose from more than a dozen apprenticeship programs for trade careers, in fields such as construction technology, industrial mechanics and maintenance and electrical work.

Klamath Community College may be the youngest institution among the best Oregon community colleges, founded by voter decree in 1996, but it hasn't taken long for the Klamath Falls school to assert itself as a player in higher education. Enrollment here has grown beyond 1,500 students, and it's worked to expand learning opportunities with a range of flexibility measures.

KCC deserves to be mentioned among the top online community colleges in Oregon, thanks to a substantial catalog of distance education courses. The Associate of Applied Sciences (A.A.S.) degree programs in subjects such as business administration, criminal justice and education available are available entirely online. Students who attend on campus can choose from a catalog that includes degree programs in agriculture science and digital media and certificates in fire science and the culinary arts.

Southwestern Oregon Community College may be one of the best Oregon community colleges for younger students looking to take care of some general education courses before transferring to a university. Roughly 85 percent of students at Southwestern are age 24 or under, and the average class size of 12 students can provide a comfortable introduction to the college experience.

Around 2,100 students attend courses at this Coos Bay school each semester. More than 70 certificates and academic degrees can be earned in six areas of interest, including several study plans in forestry and forest management.

Students hoping to go into health and public safety professions have a range of degree and certificate programs to choose from as well. Available fields include nursing, medical assisting, paramedicine and more.

Initially established in 1966, Clackamas Community College admitted just 93 part-time students on its first day of operations. It's expanded its reach quite a bit in the 50+ years since those humble beginnings, earning full accreditation in 1971 and opening two additional campuses as it grew.

Students who don't live near the flagship campus in Oregon City can take campus-based courses at satellite locations in Milwaukie and Wilsonville. CCC offers nearly 110 degree and certificate programs in more than 20 areas of study, including art and media, horticulture, fitness technology and engineering.

Nature lovers should find plenty to like about Clackamas County. Parts of two national forests are located within the county's borders, and the area around Mount Hood features skiing, hiking, rafting, fishing and more.

Treasure Valley Community College is another of the top online community colleges in Oregon by enrollment. More than 40 percent of enrolled students in 2018 took advantage of distance education courses.

Our data also show that students here graduate at one of the highest rates in the state. Just one other school on our list reported a higher percentage of students successfully completing their programs in three years or less than this Ontario institution.

Programs available here include several options for agriculture students, such as Associate of Science (A.S.) degrees in crop science and animal science and A.A.S. plans in equine business and horse production. Students interested in conservation and environmental work can earn a range of degrees and certificates in natural resources.

If affordability is one of your main concerns, you'll probably want to know about Clatsop Community College. This small institution of around 800 learners charged the lowest average in-state tuition of any two-year school in the state, reporting that enrolled students from anywhere in Oregon paid just over $4,100 for a year of study in 2018.

The close-knit campus here can be a blessing to students who like a quiet study environment or prefer to have opportunities for one-on-one time with professors. Not only does CCC have the smallest student body on our list, it also reported a student-faculty ratio of just 9:1.

Study options here include academic as well as career-based plans. Students can pursue degrees and certificates in business, nursing, welding, maritime science and historic preservation, among other fields.

Chemeketa Community College takes its name from a word in the regional Kalapuyan language that administrators at the Salem institution translate as "place of peace." It features a range of general and specialized campuses throughout the region, including a full-service location in McMinnville and the Northwest Wine Studies Center in the Eola Hills.

Chemeketa is also one of the best online community colleges in Oregon in terms of variety, providing access to nearly 30 degree and certificate programs delivered entirely through distance education. Online study plans include accounting, management, criminal justice and Oregon Transfers.

Lane maintains four learning sites in west and central Oregon. The main campus and a small downtown learning center can be found in Eugene, with a satellite campus in the seaside city of Florence and an outreach center in Cottage Grove.

Students here have multiple opportunities to learn how to take to the skies. The institution's aviation academy features FAA-approved courses in flight technology for private and commercial pilots, as well as offering an unmanned aerial systems (UAS) degree and certificate program for commercial drone operators.

Mt. Hood Community College first opened its doors in 1966 and has grown into one of the largest two-year schools in the state. More than 8,600 people enroll at the Gresham institution each semester, with around one-third of students pursuing their degrees or certificates full time.

MHCC students preparing for the workforce can pursue programs that culminate in certificates and A.A.S. degrees. Associate-level study plans include manufacturer-approved automotive technology programs like Ford ASSET and Subaru U. The wide array of certificate options feature subjects like child development and mobile application programming.

Students planning to transfer have multiple choices available to them, as well. Three Oregon Transfer degree plans are offered here, as well as Associate of Science (A.S.) programs and an Associate of General Studies (A.G.S.) plan.

Cost-conscious students who live in the Central Oregon Community College district are likely to find a lot to like about this Bend institution. No other two-year school in the state charged a lower average tuition for in-district residents than the total of less than $4,000 recorded here.

The data also show that financial aid programs have wide availability here. Around 82 percent of COCC students received some form of student aid in 2018, a greater percentage than all but three other schools on our list.

Career technical education, better known as CTE, is designed to prepare students equally for advanced study or employment in the workforce by providing hands-on training alongside traditional classroom instruction. Oregon high school students who concentrate their study in CTE subjects graduate at a rate of 88 percent, which is around 11 percentage points higher than the statewide rate for the general high school population.

College study plans in career technical education fields have begun paying dividends for Oregon residents as well. Nearly three out of four CTE graduates in Oregon either begin their careers, transfer into apprenticeships or enter military service within six months of finishing their training.

Here's a quick list of resources for more information, if you're thinking about enrolling in a CTE program in Oregon:

The Oregon Community College Association (OCCA) represents all public two-year schools in the state, including all of our ten best community colleges in Oregon, and oversees a majority of the state's college-level CTE programs. Meet with an advisor at your chosen school to learn more about the opportunities available to you.

Oregon's state legislators have put into place a range of policies and initiatives that can help community college students make a smooth transition to university degree programs after finishing their associate degrees. Here's some detail about a few significant transfer agreements and other initiatives:

Individual institutions also maintain their own school-to-school transfer agreements, so make sure to check with a transfer counselor or registrar at your community college or your intended university to find out more about your options. When you're ready, be sure to explore the top 4-year colleges in Oregon.