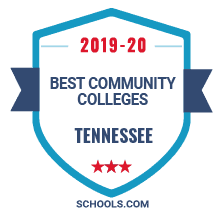 Especially if you're an adult student returning to school after spending some time away from higher education, furthering your education at a community college can be a great decision. Tennessee is one of the only states with a tuition-free program for older adults, offered through its Tennessee Reconnect initiative.

Community colleges in Tennessee are part of a 40-school system overseen by the Tennessee Board of Regents. The system includes community colleges, which offer academic programs as well as career training, and colleges of applied technology that focus on technical workforce and career development programs. Students looking for additional flexibility in their community college schedule can find hundreds of online courses, certificate programs and degree programs available through the state's TN eCampus division.

From short term certificates to associate degrees, the best community colleges in Tennessee work to meet the needs of traditional students, adult learners and everyone in between. Keep reading to learn more about the best Tennessee community colleges and get some tips on how your credits can transfer to a four-year college or university.

THE TOP 10 COMMUNITY COLLEGES IN TENNESSEE

The catalog at Southwest contains both on-campus and online degrees. Students looking for online coursework can choose among four Tennessee Transfer Pathway degrees and vocational programs in management, computer software and logistics and transportation. Campus-based programs include a phlebotomy certificate and a degree plan in electrical engineering technology.

Beyond academics, Southwest Tennessee Community College has a vibrant campus life with a number of student organizations and clubs. The school's athletic program fields teams in five sports and includes a top-ranked men's basketball team.

Roane State Community College aims to be a place where students can grow, succeed and see results, and the numbers show some encouraging signs. The student-faculty ratio at this Harriman school was tied for the top spot in the state among public community colleges, and nearly 20 of its programs boasts a job placement rate of 100 percent.

The school is one of the top online colleges in Tennessee, reporting the state's second-highest rate of distance education enrollment and offering several fully online programs. The list of distance learning programs here includes options in geographic information systems, computer information technology and health information management. Even if their degree is not offered fully online, students may be able to take online courses to help meet their program's requirements.

Columbia State Community College isn't just one of the best community colleges in Tennessee. It's also been named one of the best two-year schools in the country by The Aspen Institute, a nonprofit leadership organization.

More than 6,200 students are enrolled in credit classes at Columbia State. Traditional academic programs in geography, history, the humanities and more prepare them for future study at the bachelor's level, and technical certificate programs in computer networking, Web design and hospitality and tourism management can train them for the workforce.

Students at Jackson State Community College have a range of flexibility options to choose from. Distance education is a popular option here, with more than 42 percent of students enrolled in at least one online class in 2018, and certain campus-based degrees and courses may be available in the evenings or on weekends.

This Jackson school may also be a good choice for cost-conscious students. Although all of our best Tennessee community colleges feature relatively affordable costs, JSCC charged the lowest average in-state tuition on our list.

Student success was one category of our analysis where Motlow State Community College stood out above the rest. No other school that made our top ten reported a higher percentage of first-year students returning to enroll in the second year of their programs, and its graduation rate was the highest of any public two-year school in the state.

Adult students who have been out of school for a while have an extra benefit at Motlow. Adult College Express (ACE), an initiative geared toward non-traditional students, offers degree completion in 24 months or less, access to peer-based study groups and more.

Those five departments combine to offer more than 100 degree and certificate programs for students to choose from. Online A.A.S. degrees are available in computer disciplines like programming, networking and systems administration. Certificates in criminal justice, veterinary assisting, fire science and more are offered on campus.

At the school's flagship Gallatin campus, students can join one of numerous organizations, cheer on one of Vol State's four athletic teams or get academic help at the campus Learning Commons. Outside of Gallatin, Vol State maintains learning centers in Livingston, Springfield and Cookeville.

Students hoping to transfer to a four-year college or university after finishing their associate degree might find themselves among like-minded peers at Pellissippi State Community College. This Knoxville institution posted the state's highest percentage of former students who successfully completed their bachelor's degree after transferring out.

If you're hoping for some help with your tuition bills, also, Pellissippi State can help. Nearly 95 percent of enrolled students in 2018 were awarded some form of financial aid package.

Campus-based students hoping for some schedule flexibility can find several degrees available exclusively through evening or weekend classes, such as A.A.S. plans in medical office technology and paralegal studies. Close to 30 certificates, including subjects like videography and sustainability, can be earned in a year or less.

Nashville State Community College has been educating area students at its main campus in the state's capital since 1970. Initially enrolling fewer than 400 students and offering five associate degrees, the school now features more than 80 degree and certificate programs at six campus locations.

Founded in 1969, Dyersburg State Community College is proud of its affordability. DSCC estimates that completing your first two years of college coursework on its campus could amount to a 50 percent discount on the tuition you would pay at a public, four-year institution.

Students who plan to transfer to a four-year school after graduating from DSCC have more than 30 Tennessee Transfer Pathway plans available to them. Transfer subjects include early childhood education, plant and soil science, political science, mathematics and world languages.

For those who aren't interested in a bachelor's degree, several career-focused programs are available as well. A fast-track LPN to RN program is available for working licensed practical nurses, and a 50-hour pharmacy technology program can be completed for a flat fee of less than $1,000.

If you're looking to gain some core skills of the economy of the future, WSCC offers four certificate plans in clean energy technology. Students can also participate in more than 40 clubs or attend more than 60 events each year in the college's Expo Center.

Career technical education (CTE) programs focus on preparing students for skilled jobs in the workforce while also providing academic instruction that can set them up for success. Statistics show that the CTE approach in Tennessee is working — 98 percent of students who concentrate on CTE subjects in high school successfully earn their diplomas.

College students who pursue CTE programs in Tennessee also have an impressive record of success, particularly after graduation. Roughly 90 percent of students who earn a college-level CTE credential landed in steady jobs, apprenticeships or military service within six months of finishing their training program.

For more detailed information about CTE efforts in Tennessee, check out these helpful resources:

College-level CTE programs in Tennessee are administered primarily at the state's 40 public two-year schools, of which 13 are community colleges and 27 serve as colleges of applied technology. Different career technical education options may be available at each institution, so be sure to check with an adviser at your intended school to find out whether the program you want will be available.

While many students at the top community colleges in Tennessee are interested in career readiness programs, others are looking for a low-cost way to earn credits toward a bachelor's degree. If you fall into the latter category, you need to know how your courses will transfer from your two-year school to the four-year school of your choice.

Fortunately, Tennessee Transfer Pathways make it easy for students to transfer credit from the best Tennessee community colleges to universities and four-year colleges in the state. The Pathways function as a type of statewide transfer agreement that ensures admission and acceptance of qualifying associate degree program credits at participating four-year schools.

Even students who choose degrees outside of the Tennessee Transfer Pathway system may qualify for a smooth transfer, thanks to transfer agreements between institutions. A transfer advisor or registrar at your target university can give you more information about specific transfer agreements that might be in place.

For more general info about transfer agreements and how you can make them work for you, take a look at the college transfer guide on this site.